Isco, Real Madrid midfielder, said that he always plays himself on the left wing, when he plays FIFA 15. During time at the Bernabeu, this midfielder has been shifted around the pitch a fair bit, and was discussing his position changed with AS when he gave views about FIFA. 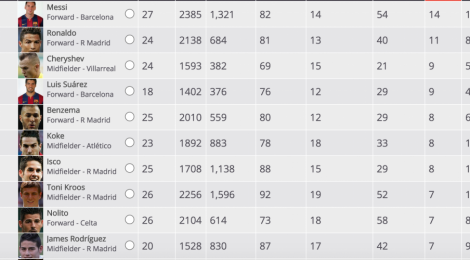 He said that he is getting used to what manager Carlo Ancelotti is demanding of him and that when he plays as Madrid on FIFA he moves himself onto the left.

This of course begs the question where he chooses to use Madrid’s brilliant front three of Karim Benzema, Cristiano Ronaldo and Gareth Bale but he may choose to drop the Frenchman and put Ronaldo up front.

Isco also joked that he felt developers EA Sports need to increase his stamina, a view that has been shared by FIFA players for some time now.

The 22-year-old said: “When I play FIFA I play myself on the left. I am happy because I am rated highly but they will have to improve my stamina, lately I’ve been fine!”

The Spain international, who has registered eight assists in La Liga this season, is one of the more popular players on FIFA 15 due to his brilliant stats for ball control and passing.

Although his pace cann’t prepare with Ronaldo and Bale’s, he is a regular feature in players’ teams for good reason. So, he is often used as an excellent player on the game.